END_OF_DOCUMENT_TOKEN_TO_BE_REPLACED

North Attleborough, MA (June 26, 2018) – A Tuesday morning crash in North Attleborough caused major problems for motorists along I-295, near exit 2. The crash was reported to police just after 7:00 am, involving multiple vehicles in the left travel lane of the highway.  Police were on scene along with medical personnel to provide aid to the victims.  Unfortunately, there are reports of injuries coming out of this crash.

Police have not identified those involved in the crash or provided any updates on the condition of injured victims.  We will continue to monitor this story and provide you with any additional information that we should receive coming from the scene.

Traffic slowed down to a crawl around the accident site as at least one lane was blocked while the crash was cleared away by police.  Motorists were forced to detour around the left hand travel lanes to get to their destinations.

END_OF_DOCUMENT_TOKEN_TO_BE_REPLACED 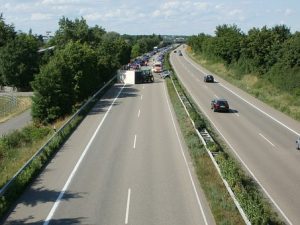 Police in North Attleborough, Massachusetts responded to an injury accident  around 9:00 am on Monday morning.  The crash occurred in the southbound lanes of I-95 just before Exit 5.  Upon arrival at the scene, police found a multiple vehicle crash with injuries.  Officers then radioed for medical assistance to tend to injured victims.  EMS responded to the crash scene and rendered first aid.

Officers spent approximately an hour investigating the crash, taking witness statements and clearing the area of debris left in the roadway by the collision.  After the investigation was complete, the crash was cleared away and traffic flow resumed to normal for the morning commute, although motorists encountered heavy residual delays due to the traffic back up caused by the accident.

There is no word at this time on the condition of the injured victims or their identities.