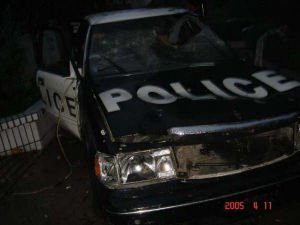 Northampton, MA (July 4, 2018) – A pedestrian suffered injuries after being struck by a police cruiser in Northampton, Massachusetts on Tuesday.  The collision took place in Pulaski Park while police were en route to a call about a suicidal person with a knife.  The woman who was struck suffered non life-threatening injuries.  She was transported to a nearby hospital to receive further evaluation, according to Northampton Police Chief Jodi Kasper.

The woman’s name has not been released.  Police were able to apprehend the knife-wielding suspect with no additional injuries to anyone involved.  It is unclear at this time if the responsible officer will be charged with hitting the pedestrian.