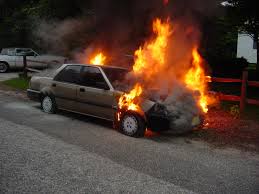 Leverett, MA (July 8, 2018) – One person was sent to the hospital early Saturday morning following a crash that left a car engulfed in flames.  Leverett police say that the accident happened on Cave Hill Road.  The driver crashed into a telephone pole after swerving to avoid a deer that had run into the roadway.  The car caught fire after striking the telephone pole.

Officials with the Leverett Fire Department responded and were able to remove the driver from the vehicle.  The driver was transported to a nearby hospital for evaluation.  There were no other vehicles or passengers involved in the crash.  There is no word on the extent of the injuries as of Saturday evening.