Grammer v. Lucking, a case from the Supreme Court of Nebraska, deals with an injury alleged to have been caused in the course of a dog attack. However, this was not a typical dog bite case in the traditional sense of the term. 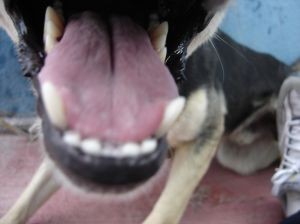 In their complaint, plaintiffs, husband and wife, were walking one day when they found themselves in close proximity to the defendant’s home. When they got to the defendant’s home, they saw that they there were two dogs in the yard. One of the of the dogs was on some type of chain, and the other dog was not on any kind of chain or restraint. There was no fence surrounding defendant’s yard.

At this point, the dogs started barking at them when they were about 20 feet from the yard. The dogs then started running toward plaintiffs. Both dogs were barking and acting in an aggressive manner toward plaintiffs. Husband stepped in front of his wife and tried to keep the dogs from approaching any further. The dog that was on a chain had reached the end of it and was unable to move any closer; however, the unrestrained dog ran past husband and toward his wife.

Wife tried to back up and get away from defendant’s dog when she tripped and landed on her elbow. The dog did not attack her in any way. At this point, defendant had come out to his yard and called his dogs back into the home. Plaintiffs filed a personal injury lawsuit against defendant using a state statue that allowed for a cause of action when a person’s dog injures another person in the course of wounding, injuring, killing, chasing, or worrying that person.

Prior to trial, defendant moved for summary judgment requesting that the case be dismissed. The specific issue, as alleged by defendant, was that there was no evidence presented by plaintiff that his dog was ever chasing plaintiff when she tripped and fell. Trial judge reasoned that plaintiff would have to prove the dogs were chasing her with the intent to catch her, and he did not consider any other parts of the statute including whether the dog injured her. Trial judge concluded the dogs were not trying to catch her and dismissed the case. At this point, plaintiffs appealed trial court’s granting of summary judgment.

On appeal, the court held that trial judge did not err in finding that the dogs did not chase her with intent to catch her. This was evident by the fact that, once she fell, the unrestrained dog stopped pursuing her. However, the court also found that trial judge did not apply the other parts of the statute such as whether the dogs had injured plaintiff. The court also noted the chase clause was disjunctive, meaning it may only be necessary to show that they were chasing her, and not that they were intending to catch her. In other words, as the court noted, the trial judge ruled out one way the dog could have injured her without considering any others. The court therefore reversed trial judge and remanded the case for further proceedings. It should be noted that not every dog injury case involves this specific issue, and you should speak with a Boston personal injury attorney about the facts of your particular case.