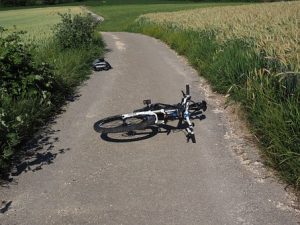 A Cape Cod area bicycle accident took place late Saturday evening.  The accident happened in Dennis, Massachusetts on Lower County Road near Shad Hole Road.   The Dennis Police Department was dispatched to the scene of the accident.   After their arrival, they quickly secured the scene and began their investigation of the crash.

A preliminary investigation indicated that the bicyclist was traveling on Lower County Road when he was struck by an oncoming vehicle, also traveling on Lower County Road.  The bicyclist suffered serious injuries in the crash.  An ambulance also responded to the scene and EMTs administered medical treatment to the injured bicyclist.  The bicyclist’s injuries, however, required hospitalization.  He was later transported to Cape Cod Hospital where he is receiving additional treatment.   The condition of the bicyclist is unknown at this time and his identity has not been revealed.  Dennis police continue to investigate the crash.  Authorities have not revealed whether they intend to charge the driver in connection with the accident.

A bicycle accident can be devastating to the victims.  In a large city such as Boston, there are many bicyclists out and about daily.  Police are accustomed to calls involving bicycle accidents and injuries.  If a bicyclist is injured in a crash with a vehicle, it is first important to determine who is at fault, or negligent in the collision.  If the vehicle operator was negligent, for example by failing to yield, the bicyclist may recover from the driver’s insurance policy. In this case, it remains unclear who was at fault for the accident.  Subsequent police investigation, including statements of those involved as well as observations of any witnesses at the scene will be crucial in determining who was responsible for the accident and, ultimately, whether the bicyclist may look to the driver for compensation for his injuries.

Bicycle accident cases involve delicate issues of traffic and personal injury law and should never be handled without an attorney.  At the Law Offices of Jeffrey S. Glassman, we have assisted bicyclists injured in accidents in and around the Boston area.  If you are facing this situation, please call our office today for a free consultation to speak with one of our team members about your case.