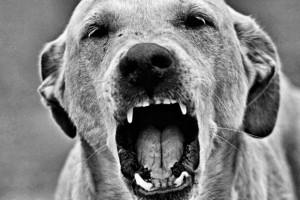 Plaintiff and defendant in this action were neighbors at the time the action was filed.  The defendant’s adult son was planning to move back to his parent’s home and asked if he could bring his dog, which was an American pit bull terrier. This is dog most people would instantly recognize as the pit bull breed.
His mother agreed to allow him to keep the dog on her property, but insisted that he build a secure dog pen in the backyard.  He complied with this request and moved home with his dog, Rocks.

The dog “growled and snapped” at his parents on the first day he brought it home and did so on various other occasions that same day. Later, the plaintiff observed the dog barking and snapping at plaintiff’s husband while she was over for a visit. The following week, plaintiff had come to the defendant’s home and entered through a gate in the backyard.  At that time, Rocks’ owner was playing with him, and the pen was not secure. The plaintiff decided to approach the dog and extended her arm in friendly manner, but the dog reacted by jumping up and latching its powerful jaws into her arm.  She attempted to run away, but the she fell down on the ground.  At this point, the dog bit her right leg, causing additional serious injuries.

As our Boston animal bite injury attorneys can explain, the test for whether or not an animal owner is liable for an attack by that animal is largely dependent on whether the animal owner knew or had reason to know the animal had a propensity for dangerous actions. In other words, if you own a dog and you have no reason to know that your dog is likely to bite anyone, then you are probably not liable if it bites someone.

The question then is how would a person know that dog has propensity to bite or attack someone.  There are various answers to the question.  The first way a person would know their dog is dangerous is if the dog had bitten someone in the past.  The second time it bites someone, it would be hard to say that they had no idea the dog would do this.  Another way would be if the owner had trained the dog to be violent. This is the case with an attack dog or guard dog.  There are also some breeds that are known to dangerous, and a pit bull is likely included in that group.
In this case, the defendant argued they had no reason to know that Rocks was dangerous, and the court granted the motion and dismissed the plaintiff’s case.  The plaintiff appealed and, eventually, the court held that it was up to a jury to decide if they had reason to know Rocks was dangerous and reversed the dismissal so the case could continue to trial.