One popular activity in the summer months is going to local fairs and carnivals. While there are regular amusement parks in Massachusetts that have permanent attractions, there are also various fairs where the attractions are brought in on specially designed trucks that basically each deploy into a carnival ride. 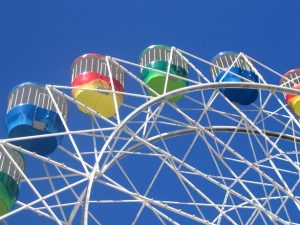 While these can be a lot of fun, we tend to see more accidents at these types of fairs and carnivals than regular amusement parks. There a variety of reasons for this, including that the equipment is mobile.  This means it is often less expensive and less well constructed and maintained than rides at a traditional amusement park.  There are also a lot more issues with regulating the rides, as they may be from another state and not where the fair is being held.According to a recent news article from CNN, the permit for one Ferris wheel ride was revoked after three riders were injured. While the ride was in operation, authorities have said three riders fell off.  One of the riders that fell was a child. Two of the victims, including the 7-year-old boy that fell off the ride, were treated and released from a local hospital. However, the other victim, who is a 59-year-old-woman, suffered more substantial personal injuries and was kept in the intensive care unit of the hospital.  She was listed as stable, which is why she was moved to the intensive care unit from the critical care unit, and her injuries are not considered to be life threatening.

Witnesses say the accident occurred when the three fell around 15 feet when the Ferris wheel cart in which they were seated suddenly flipped over and threw them off the ride.  They all landed on metal base of the ride. Various people were screaming when this happened, and witnesses describe it as a violent accident.

Following an accident such as this, there are various ways that your Boston personal injury lawyer can handle the situation.  On the one hand, it may be necessary to prove why the ride malfunctioned and who was ultimately responsible. It could be the ride operators or the company that manufactured the ride or both.  However, in some cases, your attorneys can apply the doctrine of res ipsa loquitor.  This is a Latin phrase that basically translates to the facts speak for themselves.

However, it is important to understand that in this doctrine will establish a breach of the duty of care, which is an element of negligence, but it will not take care of the causation and damages elements, which must still be established.