Not long ago, a series of mistakes at an eye surgery clinic in West Springfield resulted in five patients suffering from blindness. Each had been operated on the same Tuesday morning in what was promised to be a quick, 15-minute outpatient procedure. Blindness in general is a rare complication for such a surgery which should have raised a red flag. Five occurrences in the same day at the same clinic while undergoing the same procedure seems unprecedented, and the allegations are that the doctor used a needle to inject patients with anesthesia rather than offer a less risky alternative. One of those patients later won a $1.3 million verdict, while other cases are pending. 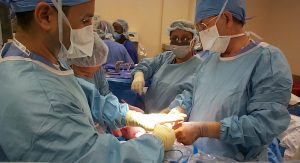 What this case has in common with a growing number of other Massachusetts medical malpractice lawsuits is the fact that it occurred at a surgical center. A recent analysis by USA Today and Kaiser Health News revealed that as surgical centers have risen in popularity, obtaining approval for an ever-expanding range of complex procedures, despite having a lack of training and state-of-the-art life-saving equipment.

The report indicated there are more than 5,600 surgical centers across the country. These facilities first started gaining steam about five decades ago, touted as a lower cost alternative for those seeking relatively minor procedures. However, now the number of surgery centers has dwarfed the number of hospitals. Although any surgical procedure has the potential for complications, there is no question that hospitals on the whole are better equipped to handle emergencies than these surgical centers.

Where Medicaid is footing the bill for these procedures ($4.1 billion annually), it does require the center to be within 15 miles of a hospital. But in some places, that can still mean it takes upwards of a half an hour to get to a fully-equipped emergency room. In the meantime, staffers at these surgical centers not only lack the equipment but also the training to minimize the harm from these complications and hopefully avoid a fatality.

Although there is no formal accounting of how often these facilities are the site of adverse events or outcomes, the KHN reporters combed through 12,000 state and federal inspection records, legal filings, autopsy records and interviewed doctors, patients and health policy experts. Among the conclusions they reached:

Perhaps it should be comforting that most of these surgeries are completed without any problem, but of course it matters for those people affected and the reality from our perspective is that it’s problematic far too often.

In Massachusetts, medical malpractice claims are filed according to notice requirements set forth in MGL ch. 231 section 60L. It’s not enough that one suffered a negative outcome. Rather, one must prove the negative outcome was the result of a doctor or health care provider supplying care that fell below accepted professional standards for their position, region, education and experience.

A number of plaintiffs have been successful in pursuing legal action against surgery centers for negligence and medical malpractice, with some of them obtaining jury verdicts in their favor and others securing confidential settlements. This is despite the fact that many in the health care field insist these incidents are “medical anomalies” that are simply out of the control of these doctors. They insist there is nothing inherently different about surgical centers that make them inherently more danger anywhere else. They chalk it up to the mysteries of the body, rather than any shortcoming in care quality. Further, they insist doctors owning a share of these sites is a good thing because physicians feel responsible for every aspect of the experience. Doctors are exempted from the Stark Law (and have been since the early 1990s) which would normally prevent them from steering patients to other businesses they might own.

Still, there are other doctors who are quick to point out that doctors and surgery centers are pushing their luck in these facilities. They are not hospitals. They don’t have the same equipment or resources. To assert they are virtually the same kind of entity is disingenuous. Further, there is evidence to indicate that when the doctor owns a share of a surgery center, it is more likely patients will have higher rates of operation – which indicates physicians may be taking risks they should not.

Medicare has instructed surgical centers to transfer patients immediately to hospitals if an emergency arises, but only one-third of these facilities voluntarily report to the government how often that occurs.

Although there is an argument that could be made about the benefit of a physician in a surgery center performing the same procedure over and over again, the reality is these centers often aren’t ready in a crisis. Medicare has issued 230 citations to these centers for lapses in training and rescue equipment requirements. For instance, one facility in Arkansas didn’t have a pediatric tracheotomy to restore breathing to a child – even though they solely performed surgeries on children.

If you or a loved one has suffered injury or illness as a result of a botched operation at a surgical center, our medical malpractice attorneys in Boston can help you explore your legal options.