When people think about lying out in a hammock, they are typically thinking of lying out in some tropical paradise with the hammock stretched between two palm trees.  They are not usually thinking about New York City.  However, as it turns out, there are hammocks in the big city, and one of these hammocks allegedly resulted in a tourist being injured, according to a recent news report from CBS News. 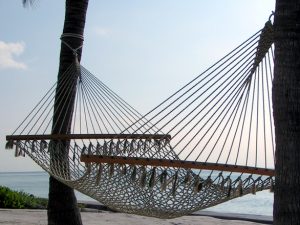 Authorities have said the hammock had been placed on the fifth story of a building in lower Manhattan.  Due to high winds and during a big rainstorm, the hammock, along with its heavy wooden base and suspension system, fell from the building and landed on a tourist walking on the sidewalk below. Victim, a 48-year-old British woman, was enjoying her vacation when the hammock came crashing down on top of her.  She had no idea what happened at first after the heavy piece of outdoor furniture fell 50 feet and landed on her. She was immediately aided by witnesses who also helped hour climb out from under the hammock.  They also called 911, as she was suffering from a head wound.  First responders quickly arrived and rushed her to a local level-one trauma center for further treatment and imaging to make sure she was not suffering from a concussion or traumatic brain injury (TBI).

Pursuant to local law, it is the building owner’s responsibility to make sure that furniture is properly secured in heavy winds. There is even a warning system that alerts building owners when winds are expected to be over 30 miles per hour.  However, despite these warning systems and the possibility of fines as much as $25,000, these types of accidents do occur.

As our Boston personal injury attorneys can explain, to prove a negligence case, it is generally necessary to establish four elements.  These elements are as follows:

The duty of care is a duty to prevent a foreseeable injury to foreseeable persons and property.  In some cases, such as with furniture on a building, the law imposes such a duty by statute.  In other cases, the duty can be imposed by contract or by the actions of the defendant.

As for the breach of a duty of due care, it can sometimes be established by specific negligent conduct, or it can even be established pursuant to a law as well.  In some cases, your attorney can use what is known as res ipsa loquitor.  This is a Latin expression that basically means the facts speak for themselves.  The common example taught to law students involved a plaintiff who was walking on the sidewalk next to a multistory piano factory.  As he is walking, a piano fell on his head and his was killed.  It was not necessary to prove how the piano fell, because it could not have occurred absent some negligence. In other words, the facts speak for themselves.  However, plaintiff must still prove damages, as that is necessary in nearly every common law personal injury case.