Hollaway v. Direct Gen. Ins. Co. of Miss., Inc., a case from the Supreme Court of Kentucky, involved a car accident in the parking lot of an apartment complex where the vehicles were both traveling at very low speeds. There were differing accounts of what actually happened in this car accident. 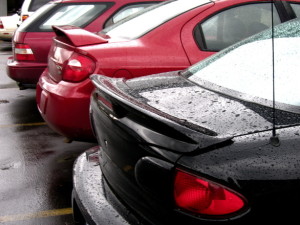 One party testified that he was driving a friend’s car with that friend in the passenger seat at the time. At this point, both occupants of the car noticed another vehicle backing out of a parking space about 25 feet from them.  They further testified that they stopped their vehicle to allow the other party to continue to back his vehicle out of his spot.  However, they then claimed the other driver turned towards them as he was backing out and did not stop driving until the rear of that vehicle crashed smashed into the front of their vehicle. The driver claimed there was no way to get out of the way of the other car as it was reversing towards them.

As one might expect, the other party has a different version of what occurred.  In his version, he was backing out of the parking lot at a slow and controlled speed when the other car came up from behind and slammed into the rear of his vehicle. He said the vehicle was traveling in the wrong direction at the time, and he had no way to avoid the collision.   In this case, neither party called the police to come and make a report as to who was at fault in this accident.

What the parties did agree to was that both were wearing seat belts during the accident and there was no visible to damage to one car.  The other car only had around $450 in damage to one fender on the driver’s side.   While this is not an issue in every case, as your Boston personal injury lawyer can explain, when dealing with car accident cases, if the injuries claimed are excessive and the damage to the vehicle is very minor, this may make it less likely for an insurance company to agree to high level of damages without additional documentation or even litigation.