While golf is not exactly the most dangerous sport, there are certainly ways a golfer could get hurt.  However, most accidents, other than being hit on the head by a golf ball, usually involve joint and muscle injuries such as a torn rotator cuff or an ankle injury, to name a couple.  What doesn’t happen often is a golfer being injured by a falling portable toilet. Yet this is what happened recently to one golfer, according to a report from Golf Digest. 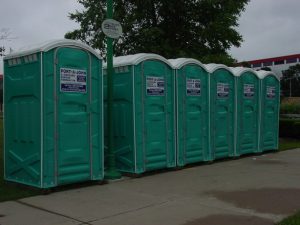 The plaintiff has alleged in his complaint that he was on standing on the fairway and watching his shot after hitting the ball with an iron when the portable toilet hit him.  In his complaint, he further alleged that portable toilet was in the process of being removed by an employee of the country club when the accident occurred. The employee was using a forklift to haul the portable toilet away, and, for some unknown reason, the employee drove the forklift off the paved golf cart patch and was driving on the green.  He could not see in front of him, because the raised portable toilet was blocking his view, and he allegedly ran into the plaintiff.  To make matters worse, the plaintiff said he was knocked to ground, and then the impact caused the large blue portable toilet to fall off the forklift and land on top of him, which resulted in him being knocked unconscious.  He has filed a personal injury lawsuit against the country club as well as the employee who allegedly was negligently responsible for the portable toilet falling on him.  It should be noted that a civil complaint is merely a series of allegations that have not yet been proven by a preponderance of the evidence by a judge or jury in a court of law, which is the standard of proof in a civil case.

As our Boston personal injury attorneys can explain, the reason a plaintiff would file a lawsuit against the employee as well as the employers is because of what is known as the doctrine of respondeat superior.  This is also known as the master/servant rule as it deals with an employer being held liable for the tortious conduct of an employee.

In order for the employer to be held liable, the employee must have been acting some way that benefited his or her employer.  In a case where the employee is a moving a portable toilet, he is doing it for the benefit of his employer, since that is his job.  However, if he had stopped what he was doing and left his place of employment to buy a pack of cigarettes and caused a serious car accident, he would be liable, but the employer would probably not be held liable.  This reason for this is because the employee would have been on what is known as a frolic and detour when the negligent act allegedly occurred.